Posted by Katy Hancock to the School Guide Blog on 09 September 2015. 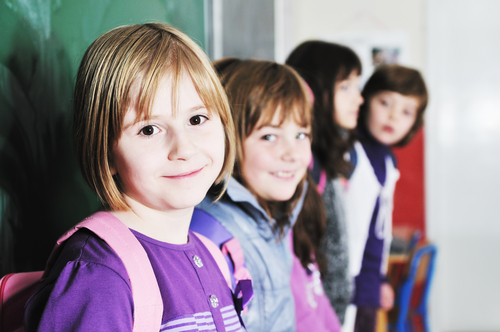 This week has been an emotional rollercoaster in our household. Less for my daughter, Alice, who has just started primary school, but more for me as I come to terms with my youngest and last child leaving the golden preschool years behind and stepping into the time machine of our school system.

Whilst my armour has been waterproof mascara, sunglasses and the avoidance of anyone kindly asking, 'Are you OK?' (a sure fire catalyst for embarrassingly audible sobs), Alice has armed herself with her shiny new shoes, a keyring bedazzled bookbag and the fact that she turns five in two weeks.

Five – an all important number when it comes to academic success or so the research tells us. The Institute for Fiscal Studies found that the differences in academic ability were largest soon after children begin school but that the gap remained measurable until GCSEs.

According to performance data, children born in August compared to September, are 6.4 percentage points less likely to achieve five GCSEs at grades A* to C. This disparity does not end here, August born children are reportedly 2% less likely to go to university at age 18 or 19.

So the announcement this morning from school's minister Nick Gibb that schools should allow parents of summer born children (defined as children born between 1st April to 31st August) to be given the right to delay their child's education for a year without being forced to skip a key foundation stage, should have been a reason for me to smile. Indeed many of my fellow mums were excitedly preparing for the possibility of another year at home with their youngest children, reassured by the other government pledge of an extra 15 free hours of childcare for preschoolers.

Here's a sample of comments from the school gates this morning:

"I've just given up work so I can assuage my guilt and spend a last year with Josh but this opens up so many opportunities for us both. I was worried he wasn't going to be ready for school so I wanted to spend some proper time with him one on one. By comparison with the girls, he's so far behind in terms of writing and holding a pencil but if he could go to school a year later he would be so ready."

"Oh my goodness at just four they're so little, you can hear the difference in speech and emotionally they're so immature, plus they get so tired even their immune systems rebel."

"I thought about postponing the year with James but the council said that he'd probably have to repeat a year and lose all his friends as a consequence. I couldn't have put him through that."

Listening to the playground chatter by parents who could all benefit from extra time at home made me feel, if I'm really honest, a bit jealous! Hearing this morning's announcement on the radio gave me a pang of disappointment. For me it's too little, too late. My son, born at the end of May, had a year less than my daughter at home. My sensitive, first born boy put on a very brave face when starting school with some children who were nine months older and so much more confident.

Don't get me wrong, he could say boo to a goose and in fact, perhaps because of his younger age, we did all we went the extra mile to prepare him for school. Before entering Reception he could recognise his numbers and letters, even read and write a little, and now, in Year Three, he is doing fine but the academic preparedness has nothing to do with the emotional maturity required of children starting school so young. The Institute of Fiscal Studies also identified that the month in which you are born affects a whole range of other skills and behaviours, not only the likelihood of being assessed as having Special Educational Needs but also a child's self esteem and confidence in their own abilities.

After a smooth settling in period, when he began full time, the reality that 'this is forever' hit home and the tears at drop off fell regularly until the October half term of Year One. A mixture of panic at the sound of the bell, not wanting to let go of my hand and sheer exhaustion all played their part in the daily routine of his teacher firmly peeling him from me. To this day the echo of, "Say goodbye to Mummy..." still rings in my ears as I know it does for many more parents of summer born children.

Not everyone in the playground was so welcoming of this morning's news. For those who need to return to work, this announcement brings with it a real moral dilemma.
"I can't afford not to return to work when Lara turns four, she's already doing more than 30 hours in nursery and starting school another year later means we'll be paying for yet more childcare so I can keep up my CPD and earn enough for the mortgage," said one.

The announced amendment to the Admissions Code is of course not making it compulsory for summer born children to defer schooling for a year but it has certainly ignited a debate that will for many burn on around the kitchen table. What it does offer, however, should the consultation and legislative wording be agreed, is an element of choice; something that many organisations have been lobbying for over many years and any devolving of state control to parental choice is bound to be welcomed by many a playground parliament around the country.

Katy is a freelance writer and former BBC Current Affairs journalist and Panorama producer. She is passionate about independent and verifiable information, has two young children and is an experienced governor at a large primary school in Bath. She is also a trained NCT Antenatal Teacher and Postnatal Supporter.